Ian Rapoport of NFL Media reports that the Jaguars are placing DE Josh Allen on the COVID-19 list Friday. 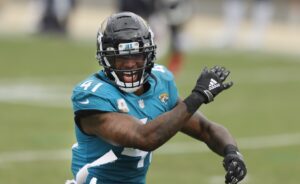 The Jaguars have confirmed the news and announced that they’ve also placed WR Laviska Shenault Jr. and OL Ben Bartch on the COVID-19 list.

Mark Long mentions that Allen is unvaccinated, which means he’s out 10 days.

The Jaguars will have a fifth-year option for the 2023 season on Allen.

In 2021, Allen has appeared in 14 games for the Jaguars and recorded 60 tackles, 5.5 sacks, an interception, a forced fumble, a recovery and four pass deflections.