According to Jamal St. Cyr, the Jaguars have released WR Laquon Treadwell. 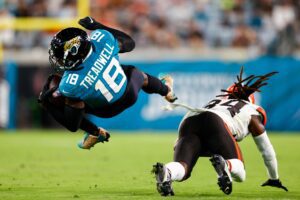 As a free agent last year, Treadwell signed a one-year, $910,000 deal with the Atlanta Falcons. In September, the Falcons released Treadwell, but eventually signed him to the practice squad shortly after. He caught on with the Jaguars after a tryout this summer.