The Jacksonville Jaguars announced the signing of veteran OL Darryl Williams on Sunday and waived TE Naz Bohannon in a corresponding move. 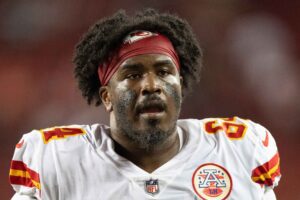 Williams, 25, wound up going undrafted out of Mississippi State in 2020. He later signed a rookie contract with the Chiefs, but was waived coming out of training camp.

The Chiefs later signed him to their practice squad but he was later off of their roster and had a brief stint with the Patriots.