The Jacksonville Jaguars brought in free agent TE Trey Burton for a tryout on Thursday, according to Aaron Wilson. 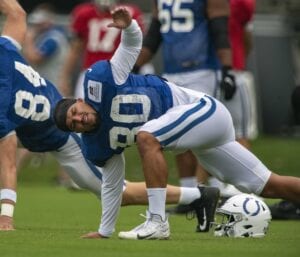 The Jaguars just placed TE James O’Shaughnessy on injured reserve, so they could use some help at the position and Burton has been the best available tight end for some time now.

Burton, 29, wound up signing on with the Eagles as an undrafted free agent out of Florida back in 2014. He played out his three-year, $1,537,500 contract with the Eagles before returning to Philadelphia on a one-year restricted deal in 2017.

Burton later signed a four-year, $32 million contract with the Bears as an unrestricted free agent in 2018. Chicago released him with a post-June 1 designation last year and he quickly caught on with the Colts.

In 2020, Burton appeared in 13 games for the Colts and caught 28 passes for 250 yards receiving and three touchdowns. He also rushed for three yards and two touchdowns.