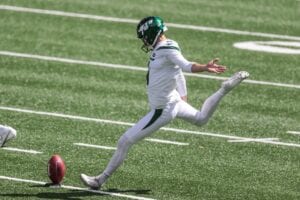 Ficken, 28, wound up signing on with the Jaguars in 2016 as an undrafted free agent out of Penn State. He lasted just over a month in Jacksonville before he was waived during the first round of roster cuts.

After a brief stint with the Chiefs, Ficken joined the Rams towards the end of 2018 after Greg Zuerlein suffered a season-ending injury. Los Angeles brought Ficken back on an exclusive rights contract, but he was waived coming out of the preseason.

The Seahawks signed Ficken to a futures contract heading into 2019 before placing him on waivers. Green Bay claimed Ficken and he ended up losing a competition with Mason Crosby for the starting job and was cut again. He caught on with the Jets and re-signed as an exclusive rights free agent.

In 2020, Ficken has appeared in seven games for the Jets and converted 9-10 field goal attempts and 8-10 of his extra point tries.

Finch, 25, originally signed on with the Eagles as an undrafted free agent out of Temple back in May of 2018. He was cut after a week and wound up making the Titans’ active roster.

Tennessee elected to waive him in December of last year and was quickly claimed by the Bengals. However, he failed his physical, once again making him a free agent.

The Raiders signed him back in August but cut him loose coming out of training camp. He signed on to the Bears’ practice squad before joining the Jets a few months ago.

In 2019, Finch appeared in eight games for the Titans and recorded 13 total tackles, three tackles for loss and two sacks.