Ian Rapoport reports that the Jets have claimed OL Pat Elflein off of waivers from the Vikings on Monday. 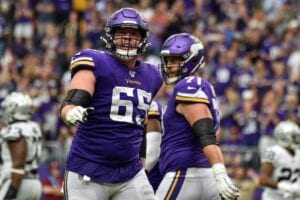 Elflein has worked his way back from injury and was just recently activated from I.R. before Minnesota opted to waive him this past weekend.

The Vikings waived Elflein on Saturday. He’s in line to be an unrestricted free agent in 2021.