Per Connor Hughes, the Jets announced that HC Robert Saleh has tested positive for COVID-19. 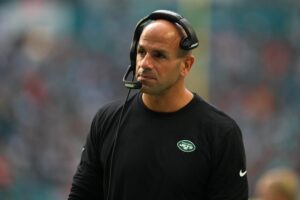 Saleh was tested after reporting symptoms. This puts his status for Sunday’s game against the Jaguars in doubt.

Rich Cimini says Jets TE coach Ron Middleton will run practice this week and will fill the role of head coach on Sunday if Saleh doesn’t make it back.

Saleh, 42, began his NFL coaching career with the Texans in 2005 as a defensive intern. He eventually worked his way up to assistant linebackers coach before he took over as the Seahawks defensive quality control coach in 2011.

The Jaguars later hired Saleh as their linebackers coach where he remained for three seasons. The 49ers hired him as their defensive coordinator in 2017. He was hired as the head coach of the Jets in 2021.