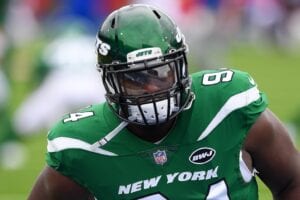 According to Brian Costello, Fatukasi was placed on the COVID list because he had close contact with someone outside the organization.

Fatukasi, 25, is a former sixth-round pick of the Jets back in 2018. He’s currently in the third year of his four-year, $2.6 million contract.

In 2020, Fatukasi has appeared in 13 games for the Jets and recorded 37 tackles, two sacks, a forced fumble and two passes defended.