The New York Jets announced Thursday that they’ve re-signed DE Jabari Zuniga to their practice squad after he passed through waivers unclaimed. 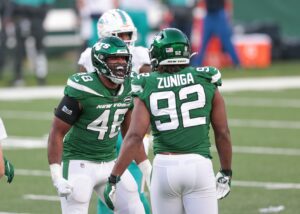 In 2020, Zuniga appeared in eight games for the Jets and recorded five tackles and no sacks.

During his four-year college career, Zuniga recorded 116 total tackles, 33 tackles for loss, 18.5 sacks, one fumble recovery, and one forced fumble.