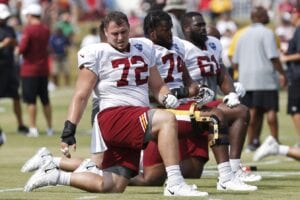 Pierschbacher, 26, is a former fifth-round pick of Washington back in 2019. He signed a four-year, $2.8 million contract with Washington, but was waived coming out of training camp last year.

Washington re-signed Pierschbacher to their practice squad and he was eventually signed to the Eagles’ roster late last season. Philadelphia just recently released him.

For his career, Pierschbacher has appeared in eight games for the Eagles and Washington.