Adam Schefter reports that the Jets are signing former Jaguars’ WR Keelan Cole to a one-year, $5.5 million deal on Thursday. 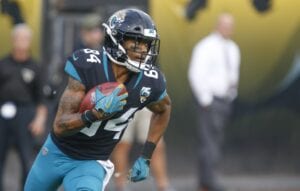 Cole, 27, signed with the Jaguars as an undrafted free agent out of Kentucky Wesleyan in 2017. He signed a three-year rookie contract with the Jaguars and returned to Jacksonville last year on a one-year restricted deal.

Cole was testing the open market as an unrestricted free agent this offseason.

In 2020, Cole appeared in all 16 games for the Jaguars and caught 55 passes for 642 yards receiving and five touchdowns.