According to Adam Schefter, Cardinals QB Kyler Murray has reported to the team facility and is expected to take part in OTAs this week. 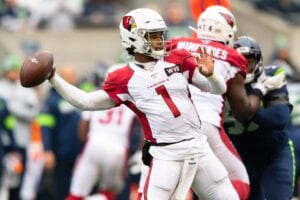 Murray had been away from the team and working out on his own, which is not necessarily unusual as a number of other high-profile quarterbacks have stayed away from OTAs, which are voluntary right now.

However, the context around Murray and the team with his contract situation has added an interesting layer.

If he’s at OTAs, it could be a sign that things between him and the team are in a good place. Cardinals GM Steve Keim has consistently expressed optimism about an extension for Murray being on the to-do list at some point this summer.

“I just think it’s a timing thing,” Keim said. “Anyone who has done it before has done it anywhere from July to September. No different for us. We know he is under contract for another year and also the fifth-year option (in 2023). He is our future, we feel that strongly.

“I feel like we’ll be able to get something done this summer.”