Ravens QB Lamar Jackson told reporters that he plans to cut off extension talks at the start of the regular season. 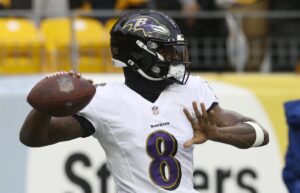 “We’re coming up to it. It’s coming up,” Jackson said when asked about a hard deadline, via ESPN.com. “The season’s coming up. We’re going to be good for the season.”

Jackson was asked if he wants to get an extension in place before Week 1, to which he replied: “Yeah, for sure.”

Ravens HC John Harbaugh has said that he expects a deal to get done in due time.

Jason La Canfora previously reported that the two parties were in active contract talks and have been exchanging contract proposals for a while.