According to Ian Rapoport, the Giants could look to trade WR Kenny Golladay if the situation between the two sides doesn’t improve. 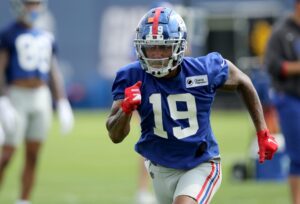 Rapoport admits a trade would be difficult, however, and it would require the Giants eating nearly all of Golladay’s remaining salary to get even a late-round pick back from another team.

The veteran played just two snaps last week because he apparently hasn’t been impressing the coaching staff in practice. If not for the guarantees in his deal, Rapoport says it’s possible the Giants may have already cut him.

Rapoport adds Golladay has not been an attitude issue, even with his comments earlier this week about how he deserves to be playing. Giants HC Brian Daboll said he appreciated the competitiveness those comments showed.

However, the situation is teetering on the edge of becoming untenable if Golladay continues to see more of the bench than the field. Rapoport adds a release is a last resort and the team and Golladay hope to get back on track to finish out the year.

Golladay was testing the open market as an unrestricted free agent for the first time in his career when he signed a four-year, $72 million deal with the Giants in 2021. He’s set to make base salaries of $13 million and $13.25 million the next two seasons.

In 2021, Golladay appeared in 14 games for the Giants and caught 37 passes on 76 targets for 521 yards receiving and no touchdowns.

We’ll have more on the Giants and Golladay as the news is available.