Jeremy Fowler reported on SportsCenter Saturday that the 49ers are the team that has come up most in league circles as a potential trade partner for Falcons WR Julio Jones. Fowler mentions that San Francisco has around $17 million or so of cap room to work with right now and Shanahan worked with Jones in Atlanta. 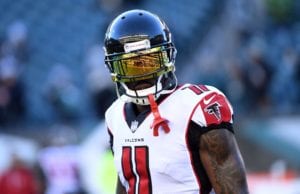 However, Fowler points out that the Trey Lance draft trade leaves the 49ers with limited high-end draft capital to work with.

According to Fowler, the Titans, Patriots, Rams and Ravens are other teams in the mix for Jones. Regarding the Ravens, Fowler mentions that they are a wildcard who would have interest in trading for Jones “if the price is right.”

Meanwhile, Mike Florio of Pro Football Talk reports that “teams in the know” consider the Falcons’ expected return for Jones to be “outlandish.” Atlanta is reportedly seeking a first-round pick for Jones and wants a team to assume his $15.3 million guaranteed salary in 2021 to go along with another $2 million in guaranteed pay for 2022.

A league source tells Florio that the report of the Falcons having a first-round pick on the table for Jones seems somewhat suspect, as other outlets have yet to confirm the news.

Atlanta must wait until after June 1 to officially trade Jones due to salary cap reasons.

There has been increasing buzz about the Falcons possibly trading Jones, given that they need to create $8 million cap space or so to sign their rookie class and only have a few options, including a Jones trade.

That crescendoed with an impromptu ESPN interview where Jones declared he’s “out of there” when asked if he’s coming back to Atlanta.

Jones’ $15.3 million base salary for 2021 is a major obstacle for any interested teams to take on. That had led to some speculation the Falcons would be fortunate to get a second-round pick back for Jones. However, these situations are always fluid and this report makes it clear things have shifted to the benefit of Atlanta.