Jason La Canfora of CBS Sports continues to hear that the market for free agent LT Trent Williams is “super strong” right now and he could end up approaching $23 million per year when all is said and done. 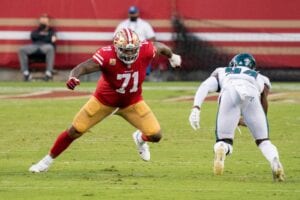 According to La Canfora, the 49ers, Chiefs, Colts and Bears are all in the mix for Williams right now.

Brad Biggs recently reported that the Bears made a “real run” at signing Williams but the word is that nothing will materialize.

Earlier in the day, Dianna Russini of ESPN reported that the 49ers are making an “all hands on deck effort” to re-sign Williams.

“Nothing yet but trust me…this is an all hands on deck effort,” a source tells Russini.

Williams, 32, is a former first-round pick of Washington back in 2010. He played out the final year of his five-year, $66 million contract that includes $43.25 million guaranteed and made a base salary of $12.5 million for the 2020 season.

After San Francisco traded for Williams, the expectation was that the two sides would allow the 2020 season to play out before evaluating a potential extension.

In 2020, Williams appeared in 14 games for the 49ers at left tackle, making 14 starts for them. Pro Football Focus rated him as the No. 1 tackle out of 83 qualifying players.