Field Yates of ESPN reports that the Lions converted $1.335 million of OL Halapoulivaati Vaitai remaining base salary into a signing bonus, which in turn created $1 million of cap space. 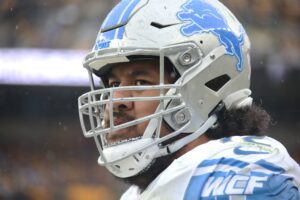 Detroit was one of the teams running tight on cap space to finish out the regular season.

Vaitai was testing the market as an unrestricted free agent for the first time in 2020 when he signed a five-year, $50 million deal with the Lions.