According to Dave Birkett, the Lions have designated RB Craig Reynolds to return from injured reserve on Thursday. 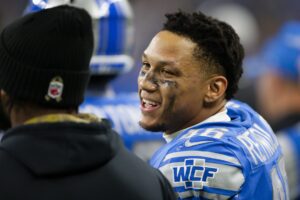 This opens Reynolds’ 21-day window to practice before being activated.

Reynolds, 25, wound up going undrafted out of Kutztown back in May of 2019. He signed a three-year, $1.755 million contract with Washington but was cut and later re-signed to their practice squad.

He later joined the Falcons in November of 2019 and returned to Atlanta on a futures contract after the season. The Falcons elected to cut him loose last offseason and caught on with of Jaguars’ practice squad in September of 2020.

Reynolds was on and off Jacksonville’s practice squad in 2020 before the Jaguars elected to waive him. He signed with the Lions in 2021 and stuck around on the practice squad after the preseason. Detroit promoted him to the active roster in December of last year.