The Detroit Lions hosted RB Jalen Richard for a workout, according to Aaron Wilson. 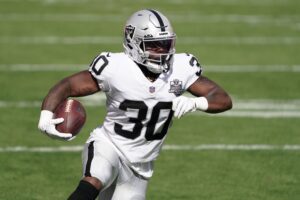 The Raiders tendered him a contract as a restricted free agent in 2019 and re-signed him to a two-year, $7 million contract in 2020.

In 2021, Richard appeared in 10 games for the Raiders and rushed for 40 yards on nine carries to go along with 12 receptions on 14 targets for 72 yards receiving and no touchdowns.