Ian Rapoport of NFL Media reports that the Lions are planning to release QB Chase Daniel and DT Danny Shelton. 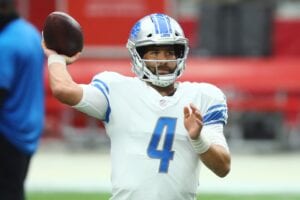 The Lions reportedly made Daniel available for trade. However, his salary likely proved to be too much for a team to take on.

Daniel, 34, originally signed on with the Saints as an undrafted free agent out of Missouri back in 2010. He spent three years in New Orleans before signing on with the Chiefs in 2013.

After three years in Kansas City, Daniels signed a three-year, $21 million contract that included $12 million guaranteed with the Eagles in 2016. However, the Eagles released Daniel a year later and he eventually returned tot he Saints.

The Bears signed Daniel to a two-year deal worth up to $10 million in 2018 and he later joined the Lions on a three-year, $13.05 million last year.

According to OverTheCap.com, releasing Daniel will free up $2.3 million of available cap space while creating $3 million in dead money.

In 2020, Daniel appeared in four games for the Lions and completed 29 of 43 pass attempts (67.4 percent) for 264 yards, one touchdown and two interceptions.

According to OverTheCap.com, releasing Shelton will free up $4 million of available cap space while creating $1,250,000 million in dead money.