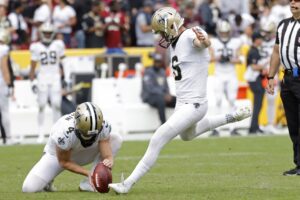 Rosas, 27, wound up signing a three-year, $1.62 million contract with the Titans as an undrafted free agent out of Southern Oregon back 2017. He was unfortunately waived by Tennessee coming out of the preseason and never signed to a team’s practice squad during the regular season.

The Giants signed Rosas to a futures contract for the 2018 season and he went on to have a Pro Bowl season. He re-signed as an exclusive rights free agent in 2019 but was released during the offseason.

The Jaguars signed Rosas to their practice squad in September of 2020 and he was eventually promoted to the active roster. Jacksonville elected to waive him and he signed on with the Saints soon after.

New Orleans added him to their practice squad before signing him to their active roster. The Lions signed Rosas to a futures contract this past February.

In 2021, Rosas appeared in four games for the Saints and converted 1 of 4 field goals attempts and all 13 extra-point tries.