Bryant, 27, is a former seventh-round pick of the Browns back in 2013. The Browns elected to waive him last year and was claimed by the Lions after severing a suspension to open the season.

Bryant was once again suspended three games for violating the NFL’s substances of abuse policy, which led to the Lions placing him on the reserve/suspended list. Detroit later received a roster exemption for Bryant before activating him in November.

Bryant played out the final year of his four-year, $2.221 million rookie contract and re-signed with the Lions to a one-year, $855,000 contract. Detroit released a few weeks ago after finishing a four-game suspension for violating the NFL’s policy on substances of abuse.

He recently worked out for the Jets and Colts, but wasn’t signed to a contract following either session.

In 2016, Bryant has appeared in five games for the Lions and recorded five tackles, three sacks, and a forced fumble.

Ihenacho, 28, originally signed on with the Broncos as an undrafted free agent back in 2012. He bounced on and off Denver’s practice squad before signing a one-year exclusive rights contract in 2014. He was, unfortunately, waived by the Broncos but was quickly claimed by the Redskins.

He finished a one-year deal with the Redskins before re-signing to a low-round tendered offer as a restricted free agent back in March of last year. The Giants signed him to a contract this past May but placed him on injured reserve. He was released with an injury settlement back in September.

In 2016, Ihenacho appeared in 15 games for Washington and recorded 66 total tackles and two pass defenses. 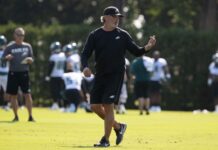 152,594FansLike
7,623FollowersFollow
239,818FollowersFollow
© NFLTradeRumors.co is an independent news source and has no affiliation with the National Football League (NFL), NFL.com, or any team(s).
wpDiscuz