According to Adam Schefter, Lions WR Marvin Jones has expressed an interest in joining QB Matthew Stafford with the Rams. 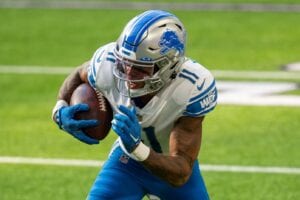 Jones is set to be an unrestricted free agent and the Lions are not expected to re-sign him. He and Stafford are close, including their families, and Jones grew up and went to college at Cal.

Schefter adds a number of players reached out to Stafford after he was traded to Los Angeles expressing an interest in joining him, and presumably taking less than the market rate to do so and land on a team with clear Super Bowl aspirations.

Jones, 30, is a former fifth-round pick of the Bengals back in 2012. He played out his rookie contract before signing a five-year, $40 million contract that includes $20 million guaranteed with the Lions in 2016.

Jones made a base salary of $6.5 million for the 2020 season. He’s set to be an unrestricted free agent this offseason.

In 2020, Jones appeared in all 16 games for the Lions and caught 76 passes for 978 yards receiving and nine touchdowns.