While Kevin Kolb appears to be the No. 1 target of the Arizona Cardinals, many have speculated that Marc Bulger could be one of their contingency options if they are not able to land Kolb via trade. Mike Jurecki’s of XTRA 910 reports that Bulger appearently has very little interest in signing with the team.

“Marc Bulger doesn’t want to play in Arizona according to my source,” Jurecki said.

Bulger is said to prefer staying in the Midwest and somewhat close to his family who lives in St Louis. The Tennessee Titans make sense given the criteria and the fact that they have already said that they intent to sign a veteran quarterback to pair with Jake Locker. It remains to be seen whether or not they have any interest in Bulger specifically as Matt Hasselbeck appears to be the speculative favorite as of now. 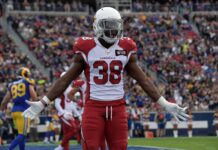