Tomlinson adds an official announcement from the Pentagon should be coming soon.

The U.S. Navy had previously denied Kinley’s request for a waiver to defer his service commitment and pursue a career in the NFL. It drew a fair amount of attention, including from Florida senator Marco Rubio, who wrote a letter to President Joe Biden asking him to intervene.

“I made the commitment when I signed my contract before my junior year and I’m still willing to honor that commitment,” Kinley added. “I just want to be able to delay my commission to play in the NFL first and be that ambassador for the Navy and help recruit. And after my time in the NFL, go serve as an officer in the Navy. I’m definitely looking forward to that career.”

Jenna Laine writes that Kinley had a pick in rookie minicamp and drew praise from HC Bruce Arians, so it’s possible he would have a shot at making the team.

We’ll have more on Kinley as the news is available. 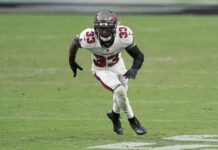