“I think when you’re going to play defense, you’re going to lean on takeaways to help a young offense, and you don’t have a kicker, a reliable kicker, that you’re going to need those points from after some of those turnovers,” Fox said on ESPN’s NFL Live via Patrick Finley of the Chicago Sun-Times. “I think the kicking question is really big right now in Chicago. And I think that might be a problem for them in the season.”

Packers HC Matt LaFleur explained he’s not opposed to QB Aaron Rodgers calling audibles if he sees something in the defense, but his goal as a coach is to call plays to where he doesn’t have to.

“It totally comes with time. You got a guy with that much experience that can see things—if he can get us into the perfect play, why wouldn’t you give him that freedom?” LaFleur said via Sports Illustrated’s Albert Breer. “The biggest thing, I’m hoping that we do a good enough job as a staff that he doesn’t have to do that, in terms of the play calls and setting us up and being in the right looks. That’s the goal, to take that off him, because I just want him to go play. But certainly, if there’s a play that’s not gonna be good, yeah, please, save us. That’d be great.”

Vikings TE Kyle Rudolph said dealing with the uncertainty this offseason of whether or not he would be in Minnesota in 2019 was hard.

“I think, for the first time in my career, there really wasn’t certainty in an offseason,” Rudolph said via Sports Illustrated’s Albert Breer. “Every year to this point, I knew what was going to happen, where I was going to be. Obviously, everyone knew our cash situation, our cap situation. So there were times that they couldn’t figure something out, where I thought, ‘Obviously, I’m the easy guy to move.’ Now, the more I got familiar with our situation and talking to [G.M.] Rick [Spielman] and to the Vikings, they made it very clear early on that that wasn’t something that they wanted to do. So I talked about it a few times through the process. That it made it easier on me to—it’s cliche to say, but—just focus on football.” 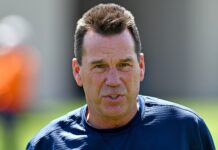