Despite trading up for QB Justin Fields in the first round, Bears HC Matt Nagy reiterated that Fields won’t walk in as the starter. He dropped a reminder that he was part of the Chiefs staff that sat Patrick Mahomes behind Alex Smith for an entire season and Chicago is in a position to do something similar with Andy Dalton and Nick Foles already in the building.

“The way that grew, and just organically happened between Patrick and Alex, I’ll never forget it,” Nagy said via Sports Illustrated’s Albert Breer. “And so here we are in a situation right now with Andy and with Nick [Foles] and with Justin, where Justin is able to come in and just, first off, learn the simple things of how to be an NFL quarterback. Him being on the grass and playing football, that’s easy, that’s what he’s done his whole life.

“But there are so many things that go into being a great quarterback, that are not just on the field but off the field, that he’s gonna be able to learn from Andy and from Nick. And that’s where I think, if you look at the certain situations, some guys make it and some guys don’t. And it’s our job as coaches to make sure we put them in the best possible environment so he can reach that ceiling.”

East Carolina WR Blake Proehl is excited to work with another undrafted free agent and son of a former wide receiver in WR Chad Beebe.

“I think that’s pretty special right there,’” Proehl said, via The St. Paul Pioneer Press. “I know that Beebe was a big receiver for them last year, and I saw him make some plays. … I’m really excited to join the Vikings.”

Proehl is also looking forward to learning from WR Adam Thielen, a player whom he tries to replicate.

“People ask me who I model my game after, and I say Adam Thielen,” Proehl said. “I love how he’s a student of the game, and I love his route running.”

Even though Proehl was looking to get drafted, he is still happy with his landing spot in Minnesota.

“It was a little heartbreaking,’’ Proehl said. “For me, obviously my dream was to get drafted. But I’m really excited about going to Minnesota because I love the organization in general.” 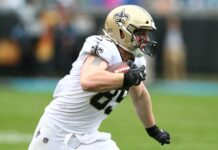