Falcons RB Mike Davis said their ability to use RB/WR Cordarelle Patterson in the same set allows them to read defenses.

Regarding Patterson’s history as a versatile running back and receiver combination, Davis said “Cordarelle is a running back” in his eyes.

“A lot of people were just looking at him as a receiver,” Davis said. “But, no, Cordarrelle is a running back.”

Patterson called playing the running back position one of the most difficult roles in the game due to pass protection, route running, and carrying the ball.

“Running back, I feel like, is one of the hardest things to do out there besides quarterback,” Patterson said. “You got to know a lot, protection, routes, running the ball, but I got a great coaching staff.”

The Panthers picked right up where they left off with RB Christian McCaffrey after a season filled with injuries in 2020. McCaffrey saw 30 total touches in Week 1 against the Jets and was his usual sensational self with them. However, Panthers HC Matt Rhule thought McCaffrey escaped a lot of serious contact with his snaps.

“Obviously, he had a lot of touches. But I didn’t feel like there was a lot of dominant contact,” Rhule said via the Athletic’s Joe Person. “He had a lot of times he was tackled by the ankle or got out of bounds. I think he took two pretty good hits. I always try to monitor that.” 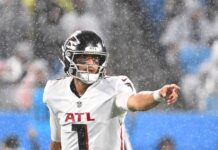