Bengals HC Marvin Lewis said they’ve yet to make any decisions regarding the possibility of bringing back either rookie CB William Jackson III or RB Cedric Peerman from injured reserve at some point.

“They’re basically fine,” Lewis said, via Katherine Terrell of ESPN. “You try not to play your hand until you have to.”

“Obviously the first-round pick is an asset, and you want to get him involved. We’ve had him all year since he’s been back from Houston and since the surgery, so to keep him invested in the football team. Ced, what he means to the football team. … and then Brandon, he’s been a contributor. So … two of the three guys have contributed and one we’re looking for contributions.”

Rich Cimini of ESPN takes a look at some veteran players he expects to be back with the team and others he could see them moving on from. 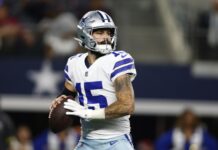