Felix Jones received a solid endorsement from Dallas Cowboys head coach Jason Garrett last week which could lead to more work than any Cowboys running back has seen in the last few years.

“Coming out of college, a guy like that continues to develop into his body and able to take the pounding and punishment of the NFL that’s required for his position,” said Garrett. “I thought he handled that well.”

While Garrett didn’t go as far to say that Jones could be the teams featured running back, it does suggest that he’s open to the idea of increasing his workload. Jones has had some injuries in the last few seasons so that will still be a concern.

Dallas will have to make a decision about whether to keep Marion Barber and his $4.25 million salary, which also includes a $500,000 roster bonus, or cut him to give Tashard Choice more carries. Barber’s recent production has decreased significantly which leaves plenty of question marks about whether or not he’s worth that amount of money. With Choice waiting for his shot, it seems like Dallas will most likely move forward with him and Felix Jones as the running backs once the 2011 season is underway. 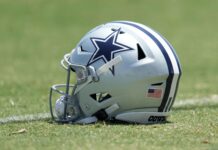