The other benefit to being the worst team in the NFL, other than having the first pick in the draft, is the amount of conversation and speculation that surrounds your teams decision. So far the Carolina Panthers have been rumored to be targeting anyone of: Cam Newton, Blaine Gabbert, Nick Fairley, Marcell Dareus, Patrick Peterson, or A.J. Green but ESPN’s Adam Schefter adds his take on the situation by suggesting that there is one obvious choice.

“Last week I sensed Blaine Gabbert would be the No. 1 overall pick; this week I’m more on the Cam Newton bandwagon. The more I hear, the more it sounds like Newton is the player to beat for the No. 1 pick. The Panthers play in the same division as Drew Brees, Matt Ryan and Josh Freeman, need improved quarterback play and need to create buzz to sell some tickets — no player can do that as well as Newton. A lot can change in the next five weeks, but I believe Carolina goes quarterback at No. 1. And today, based on what I’m hearing, I’m leaning Newton over Gabbert, the player I initially thought would go No. 1.”

Schefter’s best point is that the Panthers are more likely to take a player that can pay dividends in more ways than just his on-the-field performance. Newton is the most polarizing player in the draft so he’ll bring plenty of hype to a franchise that’s coming off an embarrassing season which translates into dollars and media coverage. Newton also plays a position of need for the team and just happens to be considered the most important position. You could make the argument that this logic would justify taking  a player like Tim Tebow No. 1 overall but Carolina would be making an “all things considered” pick rather than taking the best player available and hoping that his play will give them a chance.

Mel Kiper mentions that the Panthers should trade out of the pick and get some extra selections which will allow them to address more needs than just the quarterback position which seems to make the most sense but I still wouldn’t expect Carolina to do so. 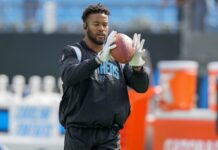