An MRI on Monday confirmed that 49ers DE Nick Bosa did, in fact, suffer a torn ACL and is now out for the season, per Nick Wagoner.

You can expect the 49ers to place him on injured reserve in the coming days and add someone to their roster.

The 49ers have already ruled out both Nick Bosa and Solomon Thomas with knee injuries.

Based on video of the play, David Chao says it appears as though Bosa suffered a season-ending ACL tear.

49ers DE Nick Bosa was carted off the field during the first quarter of Sunday’s game with what appeared to be a left leg injury. 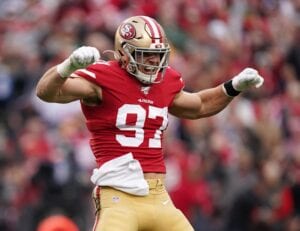 Bosa was being blocked by Jets TE Trevon Westco when his left knee appeared to buckle underneath him.

Fellow 49ers DL Solomon Thomas also suffered an injury on the same drive and had to be carted off.

In 2019, Bosa appeared in all 16 games for the 49ers and recorded 47 total tackles, 16 tackles for loss, nine sacks, one interception, one forced fumble, two fumble recoveries, and two pass defenses.

We’ll have more regarding Bosa as the news is available.