Kim Jones and Ian Rapoport are reporting that indications are that free agent WR Odell Beckham Jr. is “going to take some time” to decide on his next team. 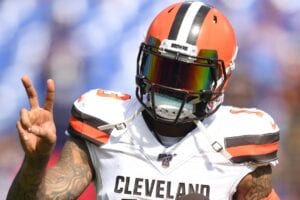 According to the report, a decision is likely “a few days away.”

Reports have been all over the place the past 24 hours. A number of teams have been linked to Beckham including the Packers, Chiefs, Saints, Patriots and Seahawks.

However, it’s hard to say who is the favorite to land him at this point.

The Packers reportedly have a minimum veteran offer on the table for Beckham, but it’s possible he may prefer a better deal in the end.

While Beckham did waive his right to $3 million of termination pay, he could still file for term pay up to $4.25 million, which would allow him to make the full $7.25 million he was owed from the Browns, according to Brad Spielberger.

Beckham officially cleared waivers on Tuesday and is free to sign with any team.

The Giants traded Beckham to the Browns in 2019 for the No. 17 overall pick, their second third-round pick and S Jabrill Peppers. The Browns reworked his contract before waiving him, making him scheduled to be an unrestricted free agent in 2022.