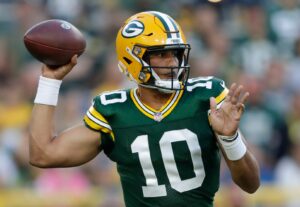 Love, 22, was a three-year starter at Utah State and earned All-Mountain West honors the past two seasons. The Packers traded up with the Dolphins to select him at No. 26 overall in the 20202 NFL draft.

In 2021, Love has played in four games for Green Bay, completing 58.5 percent of his passes for 258 yards, one touchdown, and one interception.