Rob Demovsky reports that the Packers are activating WR Jake Kumerow from injured reserve on Saturday.

The Packers will need to make a corresponding roster move to free up a spot for Kumerow.

Kumerow, 26, originally signed on with the Bengals as an undrafted free agent out of Wisconsin-Whitewater back in 2015. He was on and off the team’s practice squad during his rookie season but returned to the Bengals on a future/reserve contract last January.

Kumerow was on and off of the Bengal’s roster the past few years before signing on to the Patriots’ practice squad during the 2017 season. He eventually joined the Packers and returned to Green Bay on a futures contract this past January.

He was placed on injured reserve at the start of the regular season in September.

Kumerow has yet to appear in an NFL game. 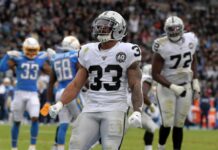 183,835FansLike
7,623FollowersFollow
273,850FollowersFollow
© NFLTradeRumors.co is an independent news source and has no affiliation with the National Football League (NFL), NFL.com, or any team(s).
wpDiscuz