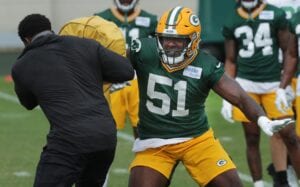 Aaron Wilson first reported that the Packers were promoting Jones.

Barnes was carted off the field after suffering an ankle injury and his ankle was put in an air cast, which initially seemed to indicate a much more severe injury. However, it turned out to be a high ankle sprain and calf injury.

Barnes, 24, wound up going undrafted out of UCLA back in 2020. He later signed a three-year, $2.28 million contract with the Packers.

Green Bay opted to waive Barnes coming out of the preseason his rookie year, but re-signed him to their practice squad. He was added to their active roster soon after, where he’s remained since.

In 2021, Barnes appeared in 16 games for the Packers and recorded 81 tackles, including four tackles for loss and one sack. He also had two fumble recoveries and four passes defended