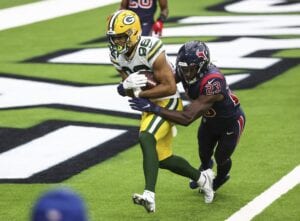 Taylor was absent from practice today.

Taylor, 25, wound up going undrafted out of Ferris State in 2019. He later agreed to a three-year, $1.755 million contract with the Buccaneers. However, the Buccaneers waived Taylor soon after.

Taylor caught on with the Packers and returned to Green Bay this offseason on an exclusive rights contract.

In 2021, Taylor has appeared in five games for the Packers and caught two passes for 14 yards receiving and no touchdowns.