The Green Bay Packers have announced that they are promoting CB Tramon Williams to their active roster. Williams was recently signed to their practice squad just a few days ago. 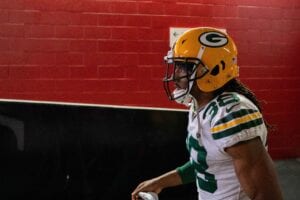 In addition to elevating Williams, the team signed P Ryan Winslow to the practice squad and released RB Dexter Williams.

Williams, 37, wound up signing on with the Packers as an undrafted free agent out of Louisiana Tech back in 2007.  He spent eight years in Green Bay before signing a three-year, $21 million contract that included $10 million guaranteed with the Browns in 2015.

After two years in Cleveland, Williams signed a one-year contract with the Cardinals back in 2017 and signed a two-year deal with the Packers the following offseason. He signed on with the Ravens in November of last year before recently being waived.

In 2020, Williams appeared in six games for the Ravens and recorded 13 tackles and a pass defense.

Winslow, 26, originally signed on with the Bears as an undrafted free agent out of Pittsburgh. He was among Chicago’s final roster cuts coming out of the preseason of 2018.

He signed a one-year contract with the Cardinals but was cut following the preseason. Arizona re-signed Winslow to their practice squad a few weeks later, and he was on and off the unit until the team waived him in September of 2020.

Since being brought in by Green Bay at the end of 2020, Winslow has spent time on and off of the Packers practice squad.

During his college career, Winslow recorded 226 punt attepts for 9,513 yards accumulated and an average of 42.1 yards per punt.