Packers RB Aaron Jones suffered a knee injury and was seen walking off the field with the help of two of the team’s training staff members. 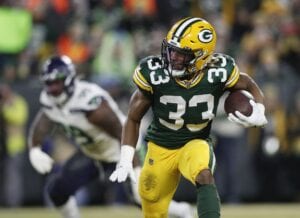 Jones had a brief stint inside the blue medical tent but was seen walking out shortly after without his helmet.

Adam Schefter reports that the Packers believe Jones has a sprained MCL, but he will undergo further testing in the coming days.

The Packers will turn to second-year RB A.J. Dillon to handle the lion’s share of the carries while Jones is out.

Jones, 26, is a former fifth-round pick of the Packers out of UTEP back in 2017. The Packers re-signed Jones this past offseason to a four-year, $48 million deal with $13 million guaranteed.

In 2021, Jones appeared in nine games for the Packers, picking up 516 yards on 116 carries and three rushing touchdowns to go along with 33 catches for 237 yards and four touchdowns.