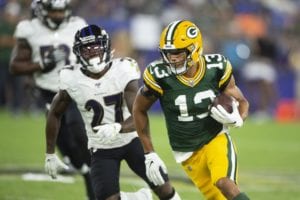 The fourth-year receiver skipped minicamp last week and was not fined because he technically was not under contract.

Green Bay placed the second-round tender on Lazard worth just under $4 million for the 2022 season.

Lazard, 26, wound up signing on with the Jaguars as an undrafted free agent out of Iowa State back in 2018. He agreed to a three-year, $1.71 million contract with the Jaguars, but was waived coming out of the preseason.

The Jaguars later re-signed Lazard to their practice squad after he cleared waivers. From there, he joined the Packers towards the end of the 2018 season and was on and off of their roster in 2019.

He was re-signed by the Packers as an exclusive rights free agent each of the past two offseasons and was tendered at the second-round level as a restricted free agent in 2022.

In 2021, Lazard appeared in 15 games for the Packers and caught 40 passes on 60 targets for 513 yards receiving and eight touchdowns.