Ian Rapoport reports that the Carolina Panthers are cutting DL Morgan Fox to save $3 million in cap space. 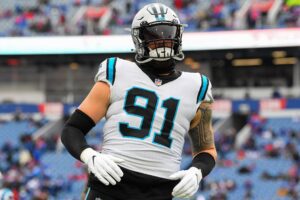 Fox, 27, wound up signing a three-year, $1.62 million contract with the Rams as an undrafted free agent out of Colorado State-Pueblo back in 2016. He was unfortunately among their roster cuts coming out of the preseason.

The Rams later signed Fox to their practice squad and eventually promoted to their active roster. Los Angeles re-signed him to a one-year contract and he then joined the Panthers on a one-year deal as a free agent.

In 2021, Fox appeared in all 17 games for the Panthers and recorded 16 tackles, one and a half sacks, and a forced fumble.