Aaron Wilson reports that the Panthers are cutting DE Joe Jackson after signing him to a futures deal back in February. 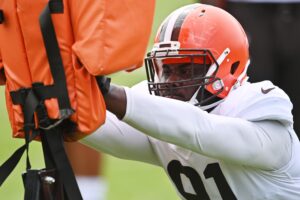 Jackson, 25, is a former fifth-round pick of the Cowboys back in 2019. He was waived coming out of training camp last year and later claimed by the Browns.

Jackson was waived by the Browns in November and eventually had a brief stint on the Chiefs’ practice squad. The Panthers signed him to a futures deal back in February of 2022.