According to Pro Football Talk, the Carolina Panthers are activating DT Daviyon Nixon for Week 3. 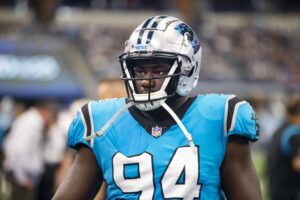 Nixon, 23, is a former fifth-round pick by the Panthers in the 2021 NFL Draft out of Iowa. He was entering the second year of a four-year deal worth $3,798,548 when Carolina cut him loose.

He was later brought back to the team’s practice squad following the final roster cuts.

In 2021, Nixon appeared in seven games for the Panthers and recorded nine tackles and a half sack.