According to Jason La Canfora, Panthers owner David Tepper has shown no signs that he’s thinking about moving on from HC Matt Rhule after two seasons. 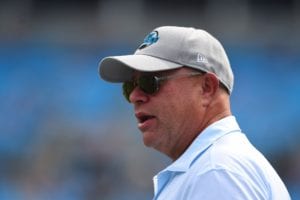 Carolina has not taken the step forward that was anticipated this season and Tepper has yet to have a winning season since taking over the team. The team also has a lot of work to do on certain parts of the roster, especially quarterback.

However, La Canfora says at this point Tepper appears to be leaning toward giving Rhule what he needs to try and turn things around in 2022.

He adds Rhule will enter the season on the hot seat, however, and a third straight losing campaign is unlikely to be tolerated. Rhule should also have options to return to college coaching if things don’t work out with the Panthers.

So far in the NFL, Rhule is 10-20 in two seasons with the Panthers.