The Carolina Panthers announced a series of roster moves on Saturday ahead of their Week 16 game. 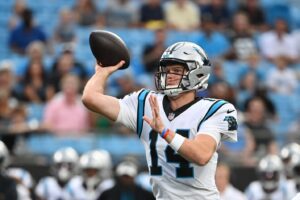