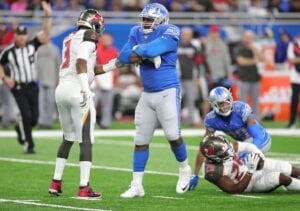 Herron, 26, initially signed with the Patriots as an undrafted free agent in 2018. After spending training camp with New England, Herron had a brief appearance on the Seahawks practice squad before re-signing on the Patriots’ practice squad.

Carolina waived him a few weeks ago.

In 2020, Herron appeared in four games for the Lions, totaling five tackles, one tackle-for-loss and zero sacks.