On Friday, Panthers GM Scott Fitterer told reporters that he’s talked to “at least five teams” about possibly trading back from the No. 8 spot in round one. 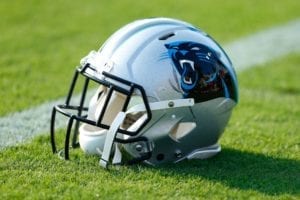 Unfortunately, Fitterer didn’t offer any specifics regarding the teams they’ve been in contact about a potential trade back.

For what it’s worth, some of the teams mentioned as speculative candidates to trade up in round one include the Broncos, Eagles, Patriots, Washington and the Bears.

A move up to No. 8 overall would likely be for a quarterback that falls a bit. Although, there has been some recent buzz about the top-two cornerback prospects — Alabama’s Patrick Surtain III and South Carolina’s Jaycee Horn — going top 10.

The Panthers traded for QB Sam Darnold and are expected to pick up his fifth-year option in the coming weeks, so it would make plenty of sense for them to auction off the pick, if a top quarterback prospect were to fall to them.