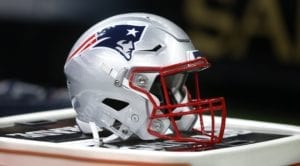 Ozigbo, 25, originally signed with the Saints as an undrafted free agent out of Nebraska in 2019. He was waived coming out of the preseason and claimed off waivers by the Jaguars.

He was among Jacksonville’s final roster cuts coming out of this year’s preseason and re-signed with the practice squad. The Saints signed him off of the Jaguars’ practice squad before waiving him.

Ozigbo was claimed by the Jaguars but eventually signed on to the Patriots’ practice squad.

In 2021, Ozigbo appeared in three games for the Saints and Jaguars, rushing for -3 yards on one carry to go along with one reception for seven yards receiving and no touchdowns.