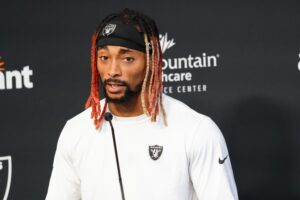 Averett will miss at least the next four games while on injured reserve before the team can designate him to return.

Averett, 27, is a former fourth-round pick by the Baltimore Ravens in the 2018 draft. He played out a four-year, $3.1 million rookie deal and entered unrestricted free agency in 2022.

In 2022, Averett has appeared in seven games for the Raiders and recorded 13 tackles and a pass defense.