Ian Rapoport reports that the Las Vegas Raiders are electing to release veteran G Richie Incognito due to their salary cap.

Incognito is reportedly fully healthy and plans to continue his career, according to Rapoport. 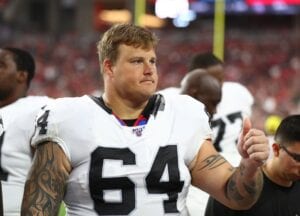 Incognito, 37, is a former third-round pick of the Rams back in 2005. He played three years for the Rams and one year for the Bills before signing on with the Dolphins in 2010.

After four years in Miami, Incognito was released and out of football for a year before securing another shot with the Bills in 2015.

The Bills released him from the retired list in 2018 and he later signed a one-year contract with the Raiders. He was set to become a free agent before signing a two-year, $14 million contract extension with Las Vegas in December of 2019.

Incognito underwent season-ending surgery for an Achilles’ injury last in the season.

According to OverTheCap.com, releasing Incognito will free up $5,475,000 of available cap space while creating no dead money.

Incognito was due to earn $5 million in salary, and according to Vic Tafur he is expected to re-sign with the Raiders for less money.

In 2020, Incognito appeared and started in one game at left guard for the Raiders.